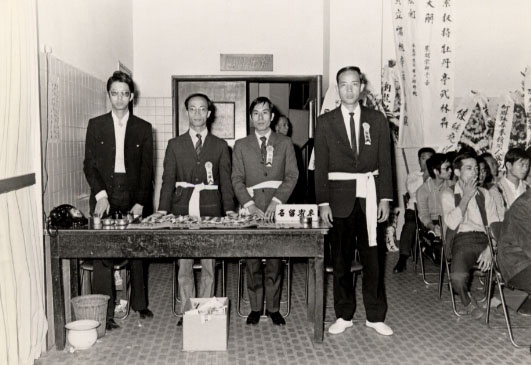 It was a very sad and somber day for the family, close friends and disciples of GGM Ip Man. The man who brought and introduced to the world the Ving Tsun system of Kung fu. A system of Kung Fu that was not seen outside of Foshan China until Ip Man brought it with him to Hong Kong when he escaped from China before the Communist took control of the country in 1949.

He faced many difficulties and suffered from several tragedies but those did not detour him from giving to his disciples and through them to the world this great Kung Fu that he was in his heart and hands, a Kung Fu that affects the lives of people around the world today.

But what happened the day after GGM Ip Man died? Yes, we can read about the funeral and the ceremonies that took place, but what did his many disciples do? Because unlike other Kung Fu styles when the head of those styles or systems passed away, he would appoint a successor to carry on the art. GGM Ip Man did not pick a successor to his legacy, he did not anoint a new head to the Ving Tsun system of Kung Fu.

What happened next was not very encouraging, because a few of his disciples took this occasion to proclaim themselves to be the sole recipient of the “Secrete Ving Tsun system” or that they and only they possessed the true Ving Tsun system and these few people became an embarrassment to the Ving Tsun family at large. These self-proclaimed Grandmasters would argue and take to the monthly publications such as “Inside Kung Fu” or “Black Belt” magazines and throw insults and challenges at each other or anyone that did not agree with them. Some of those same disciples are alive today and matured and no longer make false claims but sadly some still make false claims as to what they know and use this to deceive people.

Unlike other martial arts styles or systems, Ving Tsun was never meant to be like a factory that produces a mass quantity of the same product day after day and thereby removing or diminishing the value of Ving Tsun. Did GGM Ip Man foresee this coming? Maybe he did.

It is also possible that GGM Ip Man did not want to see his beloved Ving Tsun Kung Fu become like the other styles or systems that focused more on money and politics than people. As with many things, money and power corrupts and deforms things that were meant to be beautiful and unique.

When you consider the many students that he taught, some would become like family to him and many would just be students that wanted what he had, but never learned to respect him or the Ving Tsun system. A few loved him and were loved by him and his family. In a similar way that Jesus had many disciples, but there were twelve chosen who followed Him. Of those twelve, three were close and of those three one would be called the disciple Jesus loved!

I say that to point out that GGM Ip Man knew from those few close disciples that his beloved Ving Tsun Kung Fu was in trustworthy hands and would be preserved for the generations to come and did not need to be established like a business controlled by CEO’s or directors as the other kung fu styles or systems were.

Which brings me to the final thing that I want to say. Before Great Grandmaster Ip Man death, Grandmaster Moy Yat received fifty pieces of fine stone from Mr. Lam Chi Chang. With those stones, Grandmaster Moy Yat wanted to make a collection of stone carvings to preserve some of the most important idioms from the Kuen Kuit. He asked GGM Ip Man which idioms he should put in the book but that he was limited to only fifty idioms. Of the fifty idioms that GGM Ip Man selected one that has the most impact on me and again another reason that I believe there is no head of the whole Ving Tsun system is found in the idiom: Ving Tsun Chuen Jing Tung (Ving Tsun passing down the right way, this means to pass to the next generation the true Ving Tsun System, unchanged by your own ideas.)

In closing, stay faithful to the legacy of Ving Tsun and the great masters that came before you. Focus on your Kung Fu family and preserve the Ving Tsun because the next generation is depending on you.

The article expresses the author’s private opinion and does not pretend to historical authenticity.